Minutes of the of Dunston Parish Council Meeting held on Monday 9th March at 7.45pm in the Lamyman Room of the Village Hall

PUBLIC FORUM: Following an enquiry from the floor, it was confirmed that Beeswax have trimmed the hedges obstructing the bridle path to Nocton. (37/20)

2. DECLARATION OF INTEREST: None.

3. ACCEPTANCE OF MINUTES: The minutes for the meeting held on Monday 10th February were unanimously held to be a true and accurate record. (38/20)

COUNTY COUNCILLOR Rob Kendrick: RK’s monthly report had not been received, but he was able to provide a summary for those present.

DISTRICT COUNCILLOR Laura Pearson: LPe was pleased to report that NKDC have unanimously passed their budget for 2020-21 and plan to concentrate upon environmental, economic and community based projects.

She also highlighted potential funding for events to celebrate the anniversary of VE Day on 8th May, and a Charity Quiz in aid of Lincs & Notts Air Ambulance at The Red Lion from 7.30pm on Wednesday 8th April (See posters for details).

LPe and her co-councillor, Nick Byatt, will be holding a ‘surgery’ in Metheringham on Friday 27th March, location to be confirmed. (40/20)

The poor state of repair on the roads was then discussed, with Dunston Heath Road being referred to as particularly bad. It was suggested that this road should be made inaccessible to heavy goods vehicles, and agreed that correspondence to this effect should be forwarded to LCC Highways via RK. (41/20).

One crime was recorded in Dunston during February. (42/20)

The Police Panel (PP) Report from Monday 2nd March had been circulated prior to the meeting in order to facilitate discussion.

a. Village Keepers Report: This report largely focussed on the irresponsible disposal of litter across the village. Relevant steps will be taken to limit the specific incidents highlighted by the Keeper.(45/20)

a. Allotments : The Dunston Diggers have been discussing potential sites with Beeswax. The meeting briefly discussed the impact of any changes in terms of planning & it was agreed that any future meetings will include a representative of DPC. (46/20)

a.    Annual Parish & Annual Parish Council Meetings: Due to unexpected changes, the existing meeting date is no longer suitable. Alternatives were identified and a date will be finalised once the Village Hall Manager has been consulted regarding room availability. A commitment was made to provide refreshments.(47/20)

a. DVHMC have not met recently, but PM was able to convey a request for DPC support in the purchase of a safe working platform. Quotes are currently being sought, and this matter will be considered further once a formal request has been received. (48/20)

b. The Fashion Show will return on the 20th March, subject to the impact of Coronavirus. (49/20)

d. Informal discussions have been made regarding the improvement of the VH car park, which may become financially viable if linked to the work needed at the playing field entrance. (51/20)

e. VE Day Event: There has been little interest regarding an organising committee for this event. The Red Lion is keen to mark the occasion with an event,  and it was agreed that DPC support would be given to this instead. (52/20)

a. Fencing: It was unanimously approved to add a gate to the missing section of fence. New quotes will be sought in order to finalise this matter (53/20).

b. Bowls Green: The wood required to complete the Uplift Project has been purchased as agreed. (54/20)

c. Playing Field Entrance Repairs Quotes will be sought in order to establish if it is viable to resurface this area in 2020/21. (55/20)

d. Brambles:Methods to permanently remove the Brambles will be sought.(56/20) 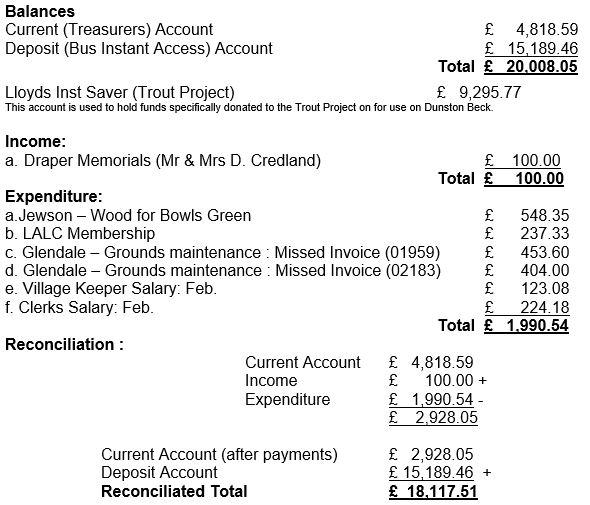 15. DATE OF NEXT MEETING

Monday 6th April at 7.45pm in the Lamyman Room of the Village Hall.