Minutes of the of Dunston Parish Council Meeting held on Monday 13th January at 7.45pm in the Lamyman Room of the Village Hall

PUBLIC FORUM: As Matt Moore(MM) from Anglian Water was present, this section of the meeting was occupied with concerns surrounding the flooding around the village.

The parishioners present voiced their frustration with the impact that recurrent flooding has upon their lives. The steps to control this matter were discussed thoroughly, with MM detailing Anglian Water’s commitment to resolve problems in Dunston by adopting a longer term solutions for the future as well as the present. MM was unable to provide a timeline for the implementation of any improvements, but he did commit to keeping DPC informed and proving access to any outlines plans as soon as they become available. (1/20)

The need for a multi-agency approach to a solution was once again raised, although a recently planned meeting to discuss this was postponed by NKDC. NB offered to liaise with MM should any issues arise with securing a new date. (2/20)

A query was raised in relation to suggestions that a new pipe is being installed between Nocton to Metheringham. MM was unaware of any plans, but will report back to the Clerk. (3/20)

The room was also made aware of planning restrictions on some of the new developments in the village, which are unable to be inhabited before works to the pumping station in Metheringham have been completed.

2. DECLARATION OF INTEREST: None.

3. ACCEPTANCE OF MINUTES: The minutes for the meeting held on Monday 9th December were held to be a true and accurate record. (Prop.LP /Sec.PM).

COUNTY COUNCILLOR Rob Kendrick RK’s monthly report had not yet arrived, so no update was available.

DISTRICT COUNCILLOR Nick Byatt. NB informed the room about the ongoing boundary review and urged individuals to voice any thoughts that they may have online (web address needed), particularly as their comments will carry as much weight as those made by Parish Councils. At present, it is felt that change to the Dunston boundary is unlikely, although building developments elsewhere may cause a ripple effect and have some impact.(4/20)

5. POLICING: There no crimes recorded in Dunston during December, although thefts from vans in Metheringham and Branston have been reported. Groups of vehicles meeting in quiet spots around the region have caused concerns, which hope to be addressed in a current focus on Anti-Social Behaviour (ASB).

Data from Speed Indicator Devices (SID) is useful to the Police, and will be shared as it becomes available (NB to liaise if necessary) (5/20)

a. Village Keepers Report: Littering on Dolly’s Paddock has reduced considerably during the wet weather, although pet owners are causing issues by leaving full poo bags in the vicinity of full dog bins. It would be beneficial to all if the nearest bin with space is used. Users can use normal waste bins and also report overflowing bins to NKDC using the details on bin signage.

Further issues include damage to the playing field by a vehicle & excessive littering on the roads leading into the village. (Dunston Rd & Lincoln Rd). (6/20)

There have been a number of planning delays with the proposed allotments at The Old Potato Store development. As a precaution, Dunston Diggers have continued to explore options for allotment sites and have become aware of a potentially viable option on land owned by Beeswax. (7/20)

b. 19/1482/OUT – Demolition of The Potato Store, Back Lane, Dunston and the erection of up to 9 dwellings and the provision of Community Allotments. Application rejected. (Further details available via NKDC Website /Planning Online) (9/20)

a. It was unanimously agreed to renew Lincoln Association of Local Councils Training Subscription at an annual cost of £120. (11/20)

b. After some teething issues, the DPC website pages have been thoroughly checked and are now up-to-date. (12/20)

The interviews for the Village Hall Manager have been held and a suitable candidate has been found and will begin her new role in February. This post will be funded by DVHMC, although DPC agreed that they could be approached for assistance if this becomes untenable. (13/20)

DVHMC have identified a number of maintenance issues with the building and grounds and requested funding of £3,000 to assist with these. As proprietors, DPC will consider some funding once these needs have been costed and prioritised. (14/20)

Proposals for the purchase of new chairs were approved. (15/20)

b. The Hub: Churches Together have begun to run ‘The Hub’ from 2-4pm at the Village Hall on the second Thursday of each month. It is hoped that this will allow the monthly event to expand and develop in its attempts to raise funds for the village whilst bringing the community together in a sociable manner. (16/20)

c. Data Hub Provision: The addition of internet provision via a data hub in the Village Hall has been addressed a number of times in recent years. However, whilst the benefits have been clearly identified, costs have been found to be prohibitive. There are currently moves to improve online access in rural communities and it would seem that costs have reduced somewhat. This will be researched further and considered for inclusion in the 2020/1 precept if appropriate. The Hub committee are very supportive of steps in this direction and would be prepared to allocate some of their profits to assist with the cost of this addition. (17/20) 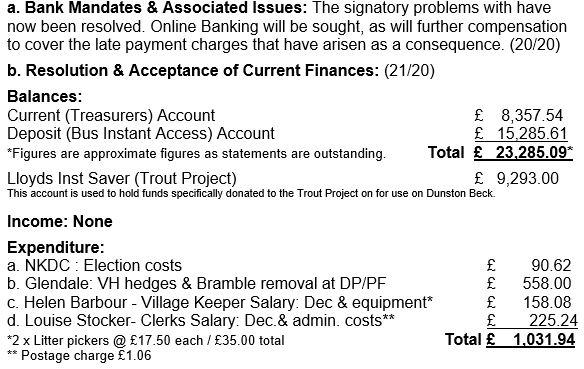 The invoice for £144.00 in late payment charges from Hags will be deferred until the banking issues can be considered. Contact Hags & Lloyds Bank. (22/20)

c. Reconciliation including all outstanding payments:

15. PRECEPT: This will be finalised at the next meeting.

17. DATE OF NEXT MEETING: Monday 10th February at 7.45pm in the Lamyman Room of the Village Hall.