Minutes of the of Dunston Parish Council Meeting held on Monday 2nd November at 7.30pm via Zoom.

ACCEPTANCE OF MINUTES: The minutes were held to be a true and accurate record.

Following the approval of a large development in Metheringham, a Traffic Regulation Order reducing the speed limit to 40 mph will be made on Dunston Road and a section of B1188/Sleaford Rd. As increased traffic through Dunston is inevitable, NB suggested that DPC might like to request that this restriction is extended from Dunston Heath Lane.  Contact LCC Highways  (possibly with Metheringham PC).

The concerns raised in relation to GP provision as the population expands are being shared and investigated.

NB suggested that DPC might like to erect Christmas tree as a festive morale booster, and offered financial support of around £100. This proposal has been considered previously, but found costly. Investigate and revisit (ALL).

RK has also received a number of queries in relation to traffic provisions following the approval Dunston Road Development. He is already liaising with LCC Highways on this matter and is happy to forward any concerns from DPC.

The Leader of LCC has expressed some disappointment at the need for a complete lockdown given the the low COVID infection rate in the County.

Details of financial support for businesses during this period will shared once the information becomes available from central government.

LCC are attempting to maintain access to as many facilities as possible during this time (e.g. open spaces (such as the castle) and Recycling Centres (See www.lincolnshire.gov.uk/clickandtip).

RK’s Monthly Newsletter will be made available shortly. This will include information to help people in the current climate, with highlights including access help with debt management and information regarding current Scam methods.

RK has also pursued the need to resurface the footpath leading from the Playing Field to Front Street raised at the last meeting.

The DPC webpage has been updated.

K. Aktin has resigned from her role. P.Cllr Vinter has shared his difficulty with attending meetings, but will continue by contributing as frequently as is feasible.

Effort will be made to encourage residents to consider filling one of the three vacancies on the Council.

There has been an alternative version of Standing Orders shared via LALC which will be used to review the DPC version. Share both documents.

The transfer of the PC accounts to Online Banking is in hand – although questions relating to the feasible number of signatories remain unanswered. Continue to research and revisit.

Full details of these roadworks are available at https://roadworks.org/ & will be displayed upon the Parish Noticeboard.

An enquiry regarding the maintenance of overgrown nettles & weeds in the vicinity of The Green has been received. As this area is part of the village conservation area, residents are not able to cut trees and hedges without permission from the NKDC Tree Officer. Any grass, weeds and nettles are not covered by these restrictions, and maintenance of these areas is encouraged. Residents should contact the NKDC Arboricultural Department for advice before undertaking any action involving trees, hedges or shrubs in the conservation area. Failure to do so can result in significant penalties being imposed, and caution is advised. Contact NKDC for advice on the case discussed.

The Village Keeper reported a significant increase of littering by employees of CDS. Contact and request a reminder is given to employees.

The Village Keeper found a 1967 driving licence. Attempt to return to owner.

The owner of the land near The Ford on Prior Lane has been identified. Contact  and request action to ensure that the fallen branch is made safe.

D.Cllr. Kendrick left the meeting at this point.

Application 20/1344/FUL: Arable Field Bounded By The Dunston Beck To The South And East, And By Dunston Fen Lane To The North And Prior Lane To The West. Habitat restoration project to create a 1.5 ha flood plain area on a 2.96 ha site alongside the Dunston Beck. Broad Approval, no comment necessary.

Full details of all Planning applications are available on the Planning Online page of the NKDC website.

The Village Keeper reported more damage to the picnic bench. Previous examinations have shown that sections become disconnected if it is jumped on or dropped heavily. Review damage & revisit if necessary.

The quotes and information collected in relation to the chafer bugs on the field have shown that is no clear consensus how to successfully eradicate these bugs. Seek further advice & delay action until Spring 2021.

The new COVID regulations has meant that the village hall has had to close. All affected groups will be contacted and furlough resumed for all staff.

DVHMC were very pleased to welcome two new members following the use of a letter to residents.

The quotes sought to address the overgrown areas around the VH have arrived. However, a review of tendering documentation has shown that it may already be covered. Query & revisit. 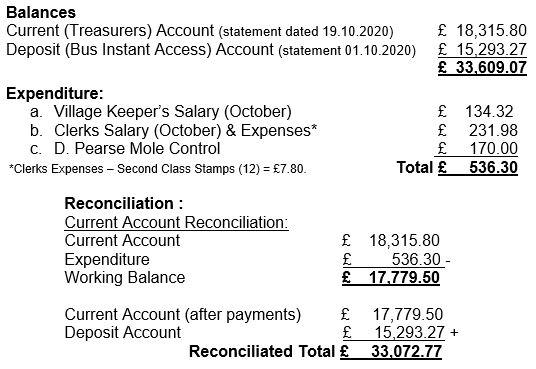 An unusual invoice was received from Wave. Investigate before payment.

A discussion of the funds received by the Community Infrastructure Levy then took place. Share terms and conditions and revisit as necessary.

Dunston Churches Together are planning to support an initiative to provide foreign workers with Christmas care packages. They will collect voluntary donations from parishioners, and enquired if DPC would like to contribute to the project. After extensive discussion, it was agreed that whilst this was a kind and heart-warming gesture, it did not constitute an appropriate use of parish funds. Instead, it was felt that donations should be given on the basis of individual preference.

DATE OF NEXT MEETING: